The woods around Fontainebleau have a reputation as one of the best places in the world to boulder. Thousands of sandstone boulders, with tens of thousands of boulder problems, scattered about a pretty forest that covers some 300 square kilometres. Fontainebleau also has a reputation as being a great place to take kids. That’s a … END_OF_DOCUMENT_TOKEN_TO_BE_REPLACED

A little over half way up the Klettersteig Pfeilspitzwand there is a brass bell hanging from the rock. If you want to ring the bell, then you need to take a detour that traverses the face of the buttress above a sheer drop.  There’s a slightly tricky step to negotiate, before you stand on a … END_OF_DOCUMENT_TOKEN_TO_BE_REPLACED

“All the Grindelwald via ferrata are closed.”  The woman at the tourist information office said these words in a firm, brisk tone that indicated that she didn’t realise that I would find them disappointing.  I knew that there was a risk that the long, cold winter might mean that some mountain routes would still be … END_OF_DOCUMENT_TOKEN_TO_BE_REPLACED

There are times when there is no doubt that you should tell someone that they’re not properly equipped for a day in the mountains and should turn back.  One example of this happened earlier this month when a stag party attempted to climb Snowdon dressed in pyjamas and trainers, in a storm and by the scrambling route of Crib Goch. Unsurprisingly, this stag party got into trouble and had to be talked down by phone by mountain rescue.

According to the Llanberis Mountain Rescue Team, this stag party was just one recent incident of groups heading up Snowdon without suitable clothing and equipment.  Although trying to climb a mountain in nightwear is an extreme example, my experience is that it’s not uncommon to come across people hiking, scrambling, rock climbing or doing via ferrata who look like they don’t have the right clothes, equipment or skills.  These people can be putting themselves at risk and can take up the valuable time of mountain rescue if they get into trouble.  What I wonder is whether there is a moral obligation on all of us to tell these people to turn around or change what they are doing.

The main argument in favour of offering some friendly advice or warning is that it could prevent someone coming to harm.  In the past I’ve warned climbers at climbing walls who have forgotten to double-back their harness.  This probably stopped them getting injury or worse.  Most people would say I did the right thing, and that not warning them would have made me morally culpable.

For me to not warn someone there would have to be reasons that outweighed this moral obligation.  One reason might be the possible consequences for me of trying to offer a stranger a friendly warning.  Some people can take badly to someone questioning their actions and offering suggestions on what they should be doing, and frankly, I don’t want to spend my time in the mountains having nasty confrontations.   Managing risk is so inherent in mountain sports: if someone else has made a judgment about the risks they want to take I can understand if they object to me questioning that judgment and assuming I know better than them.  However, the issue is not of one’s right to say something, but of the moral duty to do so.  An assessment of risk is only as good as the information and skills it is based on.  The climber who I warn about potentially dodgy anchors at a belay stance may not have realised what they were doing.  Equally, my risk assessment could be wrong because I have not spotted another, very secure, anchor the climber was using.  At least by saying something I give the climber a chance to assess the risks again and maybe do something safer.

There are couple of other things that might outweigh my moral obligation – the severity and frequency of the risky behaviour.  A type of unprepared behaviour mentioned by Llanberis Mountain Rescue Team was people heading up Snowdon wearing T-shirts and jeans.  I’ve seen this sort of behaviour lots of times.  At best, they are likely to have an unpleasant time if it rains, at worst, hypothermia.  However, if the sun is shining brightly and the wind low, then someone dressed more for the high street than the mountain is likely to be fine.  The risks may be so low that I don’t have an obligation to say anything.  In addition, if I had to have a word with every person I saw walking in the Lake District in inappropriate clothing on a summer bank holiday weekend, I wouldn’t have the time to climb anything.

I think this means I have to make a choice of how to balance my moral obligation to help others avoid harming themselves and the actual risk of the situation.  That feels a bit too vague and poorly defined to be a good guide to behaviour, but it may be all I have.

The Snowdon pyjama party were advised against heading up the mountain.  They didn’t heed the advice, but it’s good someone tried. 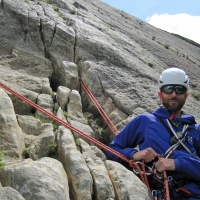