The woods around Fontainebleau have a reputation as one of the best places in the world to boulder. Thousands of sandstone boulders, with tens of thousands of boulder problems, scattered about a pretty forest that covers some 300 square kilometres. Fontainebleau also has a reputation as being a great place to take kids. That’s a … END_OF_DOCUMENT_TOKEN_TO_BE_REPLACED

A little over half way up the Klettersteig Pfeilspitzwand there is a brass bell hanging from the rock. If you want to ring the bell, then you need to take a detour that traverses the face of the buttress above a sheer drop.  There’s a slightly tricky step to negotiate, before you stand on a … END_OF_DOCUMENT_TOKEN_TO_BE_REPLACED

“All the Grindelwald via ferrata are closed.”  The woman at the tourist information office said these words in a firm, brisk tone that indicated that she didn’t realise that I would find them disappointing.  I knew that there was a risk that the long, cold winter might mean that some mountain routes would still be … END_OF_DOCUMENT_TOKEN_TO_BE_REPLACED

If it were not for bad customer service, I wouldn’t have been bouldering at Fontainebleau this week. On my first trip to Fontainebleau a year ago I tore the meniscus in my right knee while pulling hard on a heel hook. Since surgery on the knee, I’ve been trying to get back into climbing in a way that is slow, gentle and careful enough to avoid injury. Bouldering outside on boulders that often have sloping holds and rounded top-outs wasn’t necessarily what I would have picked as my reintroduction to climbing on real rock. However, I’d really enjoyed bouldering at Fontainebleau and I had a free Channel Tunnel ticket that expired at the end of June. This ticket was by way of apology from Eurotunnel for a four-hour delay to the train taking me to France on that first Fontainebleau trip and for failing to even reply to my initial complaints. That ticket was a good excuse to go.

My plan was to minimise the risk of injury by focusing on building up strength, stamina and technique by climbing a lot of easy problems. I also planned not to fall off any boulders, as the impact could be bad for my knee. There would be no testing myself on anything hard and I was going to back off a problem if I felt uncomfortable. All I was going to climb were yellows.

The problems of Fontainebleau are famously indicated on the boulders in paint. Different colours of paint denote different grades, while painted arrows show the direction of the problems and painted numbers indicate where the problems come in a circuit (i.e. sequence) of problems. The yellow problems are the easiest and so were what I planned to climb. 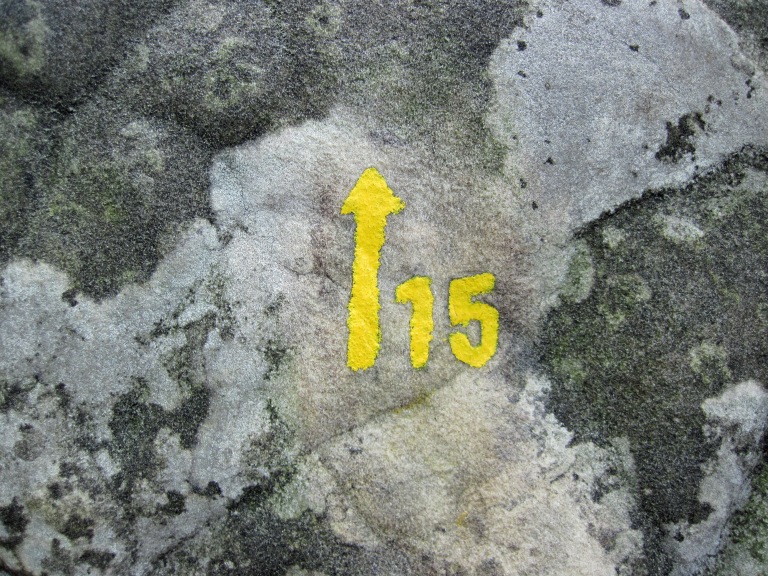 I had great fun following this yellow plan. There was no pressure and no desperate, flailing attempts to top-out. It was just moving, balancing and reacquainting myself with the feel of climbing on rock. Some of the problems were so easy that it felt like I was doing an extended warm-up session before moving on to the hard stuff. With other problems I was sufficiently out of practice at climbing that I could enjoy being a bit challenged and get a nice sense of achievement from getting to the top.

On the last day I felt confident enough to stray off my plan and do a few orange problems (orange being the next level up) at Buthiers Piscine. Some were just too tempting – with interesting shapes and features in the rock and puzzling sequences of moves to solve. However, I avoided any orange problem that looked too risky and from which a fall would certainly do my knee some damage. These often turned out to be similar grades to some of the more challenging yellow problems at Rocher des Potets, where I’d been a couple of days before. However, there were a few I completed that felt like solid oranges and which gave me feel satisfied with myself.

Other things combined to make the trip even better. Apart from one freak hailstorm and a rain shower, the weather was good. My twenty-month-old son loved running around the forest and between the boulders as well as digging in the sand, scrambling up rocks and munching baguettes. The areas we visited were also so quiet that there were often periods when Valerie, Leo and I were the only people there.

It was a great trip and a brilliant outcome from some (initially) bad customer service. Bouldering at Fontainebleau made me feel much more like a proper rock climber again. 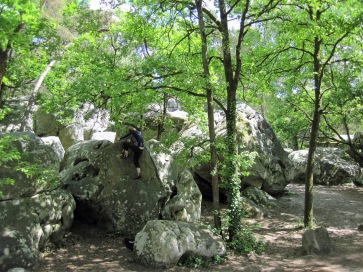 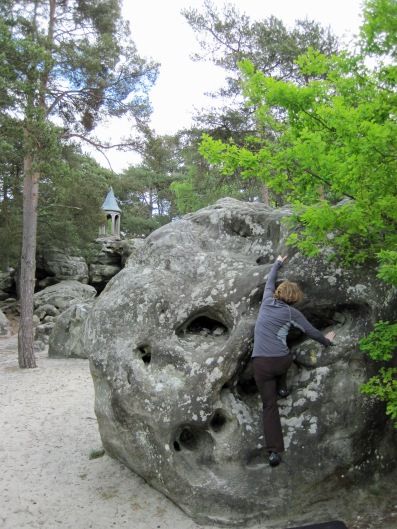 A stupid place to put an orienteering point. 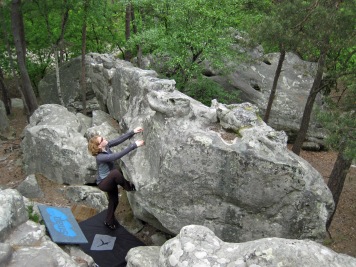 A boulder with the head of a shark at Rocher des Potets. 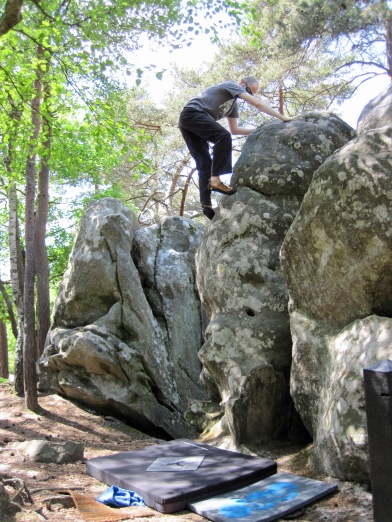 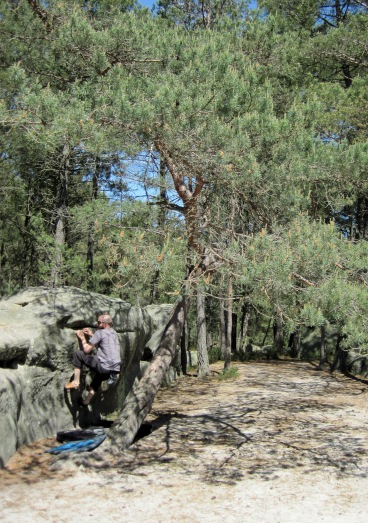 UPDATE: 2 July 2015 – I’ve written about what Valerie and I learned from taking a toddler on our bouldering trip to Fontainebleau.

UPDATE: 22 April 2017 – I’ve been back to Fontainebleau and this time been bouldering with a knee that is in much better shape than when I went in 2015.  That meant only a few yellow problems (for warming-up and doing some endurance work) and plenty of orange problems.

UPDATE: 19 May 2017 – I’ve expanded and updated my post on bouldering at Fontainebleau with a toddler.

9 thoughts on “Mostly Yellow in Fontainebleau” 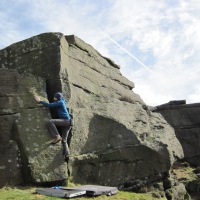